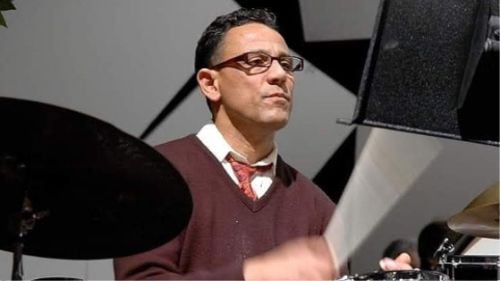 Juan Ubiera is a drummer, percussionist, and music teacher who was born in Santo Domingo in the Dominican Republic and moved to New York in the early 1980s. He studied music at the National Conservatory in Santo Domingo and holds a Bachelor’s degree in Music Performance from Brooklyn College, and a Master’s in Music Education from Lehman College, both colleges affiliated with The City University of New York (CUNY).

As an educator, Juan has been teaching music for the last fifteen years privately, and in New York public schools; he is the president of Domisol Music Academy, which he founded in 2012. He has toured Europe numerous times, both as a performer and educator, and has been published in Percussive Notes, the official journal of the Percussive Arts Society.

As a musician, Juan has extensive experience in both popular and concert music. He is currently percussionist for The Brooklyn Symphony Orchestra and the Multicultural Symphony Orchestra, and has played drum sets for many great Latin American artists. He has also collaborated with ‘Y’ Symphonic Workshop, Mannes College Symphony, Fordham University Orchestra, Riverside Symphony, and The Cosmopolitan Symphony Orchestra (featuring Paquito D’Rivera). Before moving to New York, “the mecca of music”, Juan played percussion for Santo Domingo’s City Hall Concert Band.